Andy Macleod: Our man from the Highlands

Before signing for Fortuna you played for Aberdeen FC. Your stay at Aberdeen was at the end of the most successful period in Aberdeen history including two league titles, two Scottish Cups and the European Cup winners Cup beating Real Madrid in the final. Sir Alex Ferguson was managing Aberdeen at that time, what made him so successful?

“Sir Alex made himself a success through hard work and commitment; he could also spot a good player!”

“I felt I needed a new challenge and wanted to try playing football abroad.”

Leaving Aberdeen is one thing; leaving Scotland is another. What was your first thought hearing about continental (Dutch) interest? And did you have any other offers?

“I was delighted to hear that Fortuna were interested in me, I had heard good reports from Theo Snelders. I had a few other offers one from Portugal and a few from Scotland and England.”

For us here in Sittard your transfer came out of the blue. But the same holds for all British players that played for us (before and after your stay). Hence do you have any idea how Fortuna Sittard traced you?

“Ton van Dalen was an agent for a few Dutch clubs and he was also Theo Snelders’ agent, I think that was the contact.”

Fortuna started the season brightly. Arguably the best game of the season and also your best game was the league game against Feyenoord in which you scored the second goal in a 3-2 win. What do you remember from that game?

“That game was probably one of the best memories of professional football I have! I remember my goal and the winner by Roger Reijnders, I also remember that the crowd was wonderful that evening.”

After that early bright spell Fortuna faded away. The results fell short of expectations and also you lost your place. Is there any link between the two or what do you think is the reason you rarely played?

“I feel I suffered because of the foreigners rule (only three were allowed to be selected at one time) the manager felt that the others should play more than me. ”

The few games you played, you played as a winger. Was that your ideal position or could (should!) you have played in other positions as well?

“I should have played as an out and out striker!”

Although “midtable obscurity” was the right word to describe the 90/91 seasons, the composition of the squad must have ensured a lively season! What anecdotal stories do you remember thinking about the likes of Doufikar, Maessen, Hesp, Frijns, Meijer, De Jong, Sneekes, Liesdek and last but certainly not least Linford?

“This in my opinion was one of the best squads I had played in, a very talented lot of players & friends. I will never forget Aziz Doufikar trying to learn English! And I had a few magic nights with Linford!!!!”

Some of these players must have introduced you to the Sittard pubs. What do you think about the pub scene in Sittard? Any memories?

“Lots of memories and the pub scene was great, I remember one especially the Schtadt Zitterd I think.”

“I have a lot of fond memories of the De Baandert, the home game against Ajax with a full stadium and obviously the game against Feyenoord.”

You signed a two-year deal in Sittard, but only played one year for us. At the start of the 91/92 campaigns you suddenly disappeared, without anyone (at least the fans) knowing why you left. One rumour said you were sacked as you went to Scotland for assisting at your brother’s funeral. A story that is hard to believe, so what was the reason for your departure?

“I was relegated to train with the reserve players and the management stopped speaking to me this was hard to take, my brother was ill so I left to spend some time at home. Fortune then sacked me!”

‘Still, one year in Holland is long enough to observe Dutch peculiarities (inhabitants and society). What would you call typical Dutch odd habits?”

“Eating chocolate on your bread!”

How do you look back on your stay in Holland? Was it a worthwhile experience though football wise somewhat disappointing?

“The whole experience was great I have no regrets!”

“The Highland League is a semi professional league; you can qualify through one trophy to play in the Scottish Cup, which I have achieved many times as a player and once as a Manager.”

Football is in disarray these days. Especially smaller clubs find it more and more difficult to survive in an environment where money dictates matters. In that perspective, how do you see the future for teams like Forres Mechanics? And does the club have any ambitions to leave the Highland League (for the first time in over 100 years!)?

“Teams that play in this league are happy to stay there. They have plenty of money and enjoy the fact that they don’t have to be successful to survive.”

You’re not only playing for Forres Mechanics, but also managing (assistant to Gordon Connelly) the team. Do you have any ambitions in taking on a management position at a (professional?) football club in the near future?

“That would be great and I am always ambitious.”

Playing in the Highland league is probably not leading to financial independence. Hence, what are you doing for a living next to playing football?

“I am the Manager of two Leisure Centres and two Swimming pools in Scotland.”

If you’re not interested in watching football is there any other reason for visiting the Moray district? And how would you characterize the people in that area?

“Moray is a very beautiful part of Scotland and the people are very nice.”

Here in Holland we associate Scotsmen with spending a lot of time drinking whisky in their favourite pub. Does that hold in general for Scotsmen and in particular for you?

“Yes to both questions.”

Last year Berti Vogts was announced as the new Scotland manager. “Experts” immediately had doubts on whether he was the right man for the job. A 2-2 draw against Faroe Islands didn’t help his cause. What do you think, is he to blame for the poor results or is Scottish football in a crisis?

“I feel Scottish football is in a crisis has nothing to do with Berti.”

A big issue in Scottish football is the threat of the Old Firm to join the English Premier League. The opinion of Rangers and Celtic is well known, but what do the smaller clubs think of this potential move?

“A disaster waiting to happen.”

The similarities between the Dutch and the Scottish premier league are striking. Small countries in which a few big teams (two in Scotland; three in Holland) divide the prices. The rest fill up the table. You played in both leagues. There must be differences, such as?

“The Dutch league was far more technical than the Scottish; also the facilities are far superior to the Scottish shambles.”

Euro or Pound and why?

“Euro – lets all live in harmony with each other.”

Any final thought for the Sittard fans?

“I am sorry I HAD to leave without a proper good buy. The fans made my time in Holland very special!!!!” 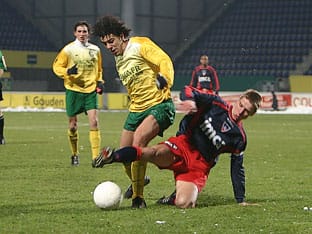 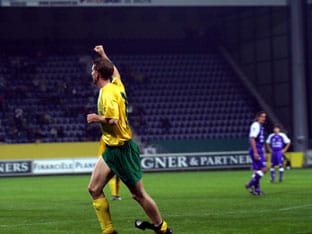 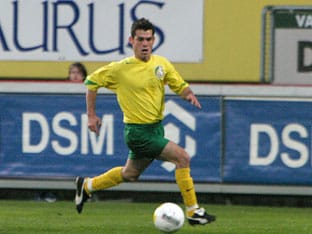