Mike Jeffrey: Our man in Liverpool

As you’re from Mersey side, the obvious but necessary first question surely must be, are you a Blues or a Reds supporter?

“No I didn’t play in the Prem for Newcastle. I was playing for Doncaster Rovers and we played against Newcastle in a pre-season friendly. A couple of months later Kevin Keegan came in for me and I signed for Newcastle.”

In Newcastle you worked under the Keegan regime. Can you tell us about your experience with him, for example what makes him different from other English managers?

“Keegan has an incredible aura about him. He is a great motivator of players and because of the player he was himself, he commands amazing respect from everyone.”

Eventually you went to Rotherham United. It’s there that Fortuna spotted you. Were you informed about the interest of Fortuna Sittard and what were your thoughts about it? Did you have a choice to sign with another club in those days?

“I was told about Fortuna’s interest by the Rotherham manager after they had been to a match just looking in general I think rather than specifically at me. It was around Xmas time and I was excited about the prospect of joining a foreign club for the experience.”

Last year Fortuna moved to a new stadium, but supporters keep heroically talking about stadium De Baandert. What is your opinion of De Baandert Stadium, did you experience the atmosphere as being pleasant?

“De Baandert Stadium had a really good atmosphere because it was a very tight ground with the stands close to the pitch. I don’t think the big clubs liked playing there.”

Especially now that you’ve left, it shows how good the striking partnership Jeffrey/Hamming actually was, as it appears to be very difficult to find a new striking partner for Hamming. What do you think are Ronald Hamming‘s best qualities?

“His strength was his finishing, and he was very good at playing on the shoulders of defenders.”

What was it that made the two of you gel so well?

“We complemented each other although I probably did most of the work!”

You played four years for us and we enjoyed every single year, but what is your “Finest Moment” at Fortuna Sittard?

“The finest moment was the match against PSV in the semi-finals when we won 3-1 away.”

The biggest game in your Fortuna spell obviously was the Cup Final against Ajax. Can you tell us something about your experience of that game? Should we have won it?

“We started the game very slow and really having gone 2-0 down it was almost over after 20 minutes. The atmosphere was great and it was a great day out but we let ourselves down. We only played at 50% and didn’t give ourselves a chance.”

Very important in your personal development but also for the team in general was the arrival of Bert van Marwijk. In which aspects can you compare Bert van Marwijk to Kevin Keegan?

“Both men are very good at building players confidence and promoting self belief. It is difficult to really compare them because I played under Bert for much longer, but I think Bert was more into the tactics of the game, which is generally the case in Holland.”

The most promising player in those days probably was Mark van Bommel. He now plays for PSV but is keen to move to England in the near future, which English club would suit him best?

“Probably Arsenal would suit him best.”

At the end of the 98/99 season you left Fortuna. There were a lot of rumours about where you would go. One rumour said that West Ham’s Harry Redknapp was interested and had watched you in Sittard. Rubbish, or was there a possibility to go to Upton Park?

“It was nonsense. I never heard anything like that.”

Finally you opted to go to Kilmarnock, why Kilmarnock?

“Everything was up in the air at Fortuna and I had to make a decision. After 4 years I felt it was time to come back to Britain. Kilmarnock had watched me at Fortuna and I was on a Bosman.”

There is one thing we haven’t understood when you played in Scotland. Why did you wear the number 4 shirt at Kilmarnock?

“It was just the number that they gave me after a player had left. There was no particular reason for it.”

Dutch rumours say that Fortuna have tried to persuade you to come back to Sittard. Have you ever been contacted by Jacq Opgenoord to discuss a shock return?

“Yes I have spoken to Fortuna about coming back. It was just before I came to Grimsby. I spoke to Jacq but it fell through.”

If you had to compare Grimsby Town to a Dutch premier league team, which would that be?

“I would say RKC or Mastricht.”

How come you always score more goals after the winter break?

“Fortuna were always better after the winter break and that helped me so far as goals went. Why that was I don’t know.”

Are you still following Fortuna Sittard, do you have some contacts in Sittard?

“Yes I always look for their results and I’m still in touch with Urvin Lee and Mark Burke.”

Which Grimsby Town player would be an asset to Fortuna Sittard?

“Probably Menno Willems who has just signed for us from Vitesse Arnhem – he knows the Dutch game ! That is a difficult question. There are lots of good technical players here at Grimsby.”

We intend to visit Grimsby. If you’re not interested in football, is there still a reason to go there?

“The fish and chips are very good and there are plenty of good pubs!”

This year you’ll be turning 30. Still some years to go of course, but any plans about your life after your professional football career?

What is your opinion of this interview and any final thought for the Fortuna support?

“It’s been a good interview and nice to chat about my time at Fortuna. I hope that they stay out of trouble at the bottom of the table and then can do well next season.” 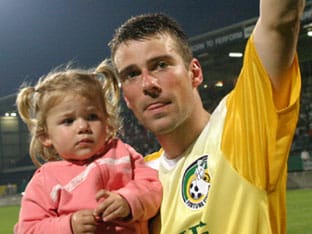 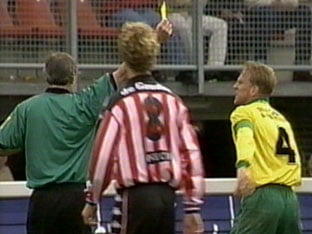